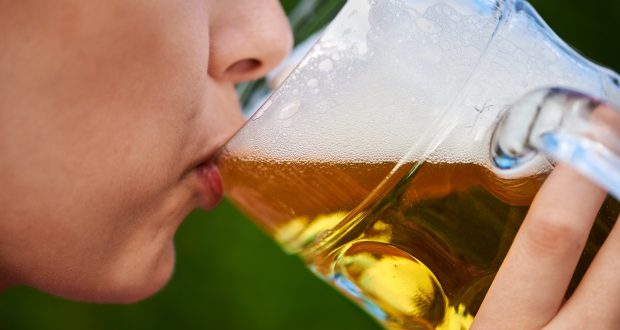 The ‘Menopause Beer’ That Can Help You Sleep Better

We’re all aware of the importance of sleep, particularly as we age. During the progressive stages of menopause, even previous party animals and night owls tend to need more rest.

Ironically, the body seems to fight against sleep as we grow older, just when we need Z’s most. From perimenopause-when the ovaries begin producing less estrogen, to post-menopause-when we’re more susceptible to chronic health conditions, sleepless nights are increasingly common.

If menopause and its irritating symptoms are keeping you awake at night, you’re in luck! The Portsmouth Brewery in New Hampshire has released a brand new sleep-promoting beer called Libeeration. The ale is specially formulated to relieve common menopause symptoms, and help women “celebrate the liberating aspects of this stage of life,” according to the brewery’s website.

The all-natural beer is intended to reduce mood swings, sleeplessness, and other menopause symptoms that can lessen quality of life and the ability to rest. “After consulting with women health practitioners and herbalists, our team came up with ingredients believed to relieve symptoms like sleeplessness, hot flashes, and mood swings,” notes brewery co-owner and creative director, Joanne Francis.

So, if you’re looking for a natural way to sleep better, feel better, and live life to the fullest, a bottle of brew may be just what you need.

After conducting extensive research, and personally taste-testing herbs with head brewer Matt Gallagher, Francis opted to include eight menopause-busting ingredients in her formula:

In addition to helping countless others, Francis considered her personal health when developing the brew. “As someone who suffers with chronic Lyme disease and chronic migraines, I quickly learned that along with traditional medicines, some alternative therapies are pretty amazing,” she shares with Forbes.

The brewer acknowledges that there’s no doubt the beer industry is dominated by men, and targets males between the ages of 21 and 35. She saw a need to develop a beer geared toward females, and is intent on empowering women as they navigate menopause and beyond. “We want to shift the mentality from focusing on the negative aspects of this stage in life, to celebrating the liberating aspects! Fun, crazy, wildly different: that was our goal to reach women who truly know what it means to be hot!” Francis writes on her company’s site.

If you’re not sold on the women-only brew, you’re not alone. Even Francis’ staff initially shunned the idea, but have since had a change of heart.

Because alcohol has been linked to worsened menopause symptoms, experts urge consumers to enjoy Libeeration in moderation. “My suggestion for menopausal women would be to enjoy a bottle, but limit the intake to no more than one,” medical doctor JoAnn Pinkerton tells Forbes. “Limiting to one drink will avoid later sleep disruption or night sweats, which may be triggered by the alcohol.”

After selling out within a week of its initial release, the popular ale demanded an encore. The brewery recently announced plans for a second run.

Sure, menopause beer might not be for everyone, but for those sleep-deprived women who are in desperate need of uninterrupted Z’s, it’s certainly a viable option. Check with a medical professional to ensure the brew won’t interact with any medications, and bask in the Libeeration.

Having suffered from Insomnia and neck issues her entire adult life, Rachel Brown has studied the topic of sleep for many years. Throw three beautiful (but cheeky) kids into the mix and it’s easy to see why it plays such an important role in her life! As well as being a freelance writer, she runs the site over at Pillow Picker; a blog dedicated to helping people find the best pillows for a variety of sleep disorders and chiropractic issues.