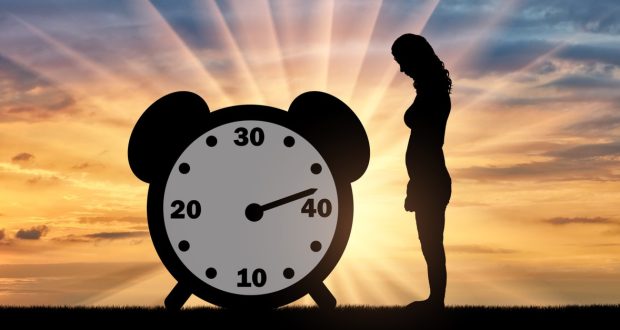 Signs of Early Menopause and How to Manage It

Age is a key factor in everything that involves the life cycle of a human being, from birth to death. Women, for instance, undergo several stages – toddler, adolescent, child bearing and menopause. Menopause is the time when a woman can no longer get pregnant. This could happen in her 40’s or in some women, it can be earlier or later than the average menopause age of 51 in the United States.

All the same, the earlier or late end of the menstrual cycle doesn’t purely indicate health problems. Some would be the effect of illness and medical procedures like hysterectomy- the surgical removal of the uterus. But, when a woman stops conceiving between the ages of 45 and 55, whether natural or induced, it is known as early menopause.

Menopause occurs when women ovaries stop producing eggs, which results in low estrogen levels. Usually is said to be in a menopause state if she hadn’t experienced her period for about or more than 12 months.

In the United States, the average age for natural menopause is 51. However, if it happens at the ages of 40 or below, that’s called premature menopause. But early menopause refers to the onset before the age of 45. Anything that stops estrogen production or damages the ovaries would cause early menopause.

Here are some of the causes of early menopause;

Studies indicate situations of inherited menopause-like for those women with Fragile X syndrome- the genetic carriers passed down in families. So, suppose there’s no known medical reason for early menopause. In that case, you might have inherited it, or you’re related to someone with a history of early menopause.

Therefore, ask your mother when she started her menopause to tell if you may be experiencing the same condition. But, it should not worry you much because sometimes the genes would not be 100% written.

You might as well experience early menopause due to some chromosome disorders. For instance, having abnormal genes like those occurring in Fragile X and Turner syndrome entails being born with an incomplete chromosome. Having Turner syndrome means you have affected ovaries that cannot function well, forcing you to enter menopause earlier than expected or prematurely.

Lifestyle factors like smoking can significantly affect your menopause ages. For instance, smoking tobacco has some anti-estrogen impacts contributing to early menopause. Several studies have shown that regular or long-term smokers have a high chance of experiencing menopause a year or two earlier than those who do not smoke.

An autoimmune disease is a condition where the immune system attacks the body—your body resistant system guards against bacteria and other invaders. But when diseases like thyroid and rheumatoid cause inflammation affecting the ovaries that would be the beginning of your menopause. This may occur at any age, resulting in premature, early or post-menopause.

How would women know if their menopause is coming early than expected?

Around menopause, various mental and physical changes may occur. Watch out for the following;

How can you manage early menopause?

In most cases, menopause is not a health issue but rather a natural transition. However, it would help if you visited your healthcare provider whenever you noticed any of the above signs and symptoms for diagnosis. Depending on their analysis of the cause, doctors may advise you to consider;

This is a treatment method aiming to balance your body hormones level by providing synthetic hormone progesterone and supplemental estrogen. These hormone therapies can be in topical creams or skin patches.

You must ensure you:

●     Get plenty of rest while establishing good sleeping habits

Other treatments include taking over-the-counter drugs, gels, and creams to manage vaginal dryness and some antidepressants for hot flashes.

Women may experience menopause at different ages. Some would have premature, while others would have early and late menopause. All of the stages would present different physical and emotional signs and symptoms. Visit your doctor to help identify the cause of your state and prove the best management method.

Beryl is a health and wellness writer who enjoys contributing articles on women’s health. She is a trained nurse who currently practices as a health writer. If she’s not writing, she will be at the garden playing with Myra – her dog.