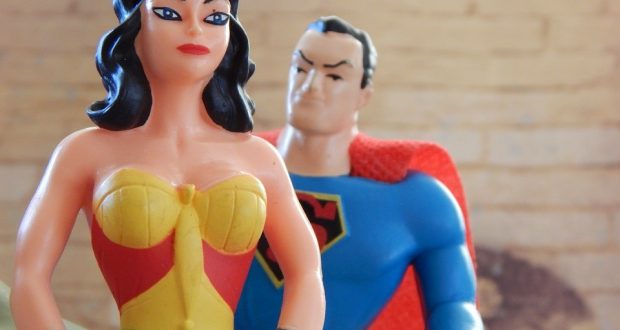 We all know that women are powerhouses — we govern nations, we birth children, and we speak up in the face of injustice. But our influence goes far beyond the obvious. Repeated research has shown that women’s health is crucial to the overall well-being of nations as a whole.

Move over Superman. This is the era of Wonder Woman.

Did you know that during menstruation, women’s bodies actually give them superpowers? No joke. You might not have realized it under the influence of all that Midol, but period powers are the real deal.

You don’t need to be covered in a radioactive substance in order to acquire super senses. It’s just a side effect of a woman’s cycle. During PMS, many women have sensitivity to light and sound; while this can lead to debilitating migraines, women have the opportunity to use this curse for the greater good. You can be the first to alert your household of a burglar, or dodge out of the way of an incoming car, faster than non-menstruating counterparts. You can hear the cry of a cat in a tree from a distance.

Furthermore, there is some evidence that women have special smell-sensitivity while on their period. Scents that you normally love suddenly become off-putting. Again, this might sound like a disadvantage, but it’s all about perspective! You’ll have the ability to detect poison in a loved one’s meal, or simply being able to tell that there’s a distasteful vegetable in it. You might laugh at this, but when your oven is leaking for too long and there is an explosion in your kitchen, you’ll wish you had a menstruating woman there to smell the gas beforehand.

The hormonal fluctuations in a woman’s body during her period make her a master sleeper. Once again, you might have thought that your exhaustion during that long, arduous week of menstruation was a negative symptom, but in reality it was a superpower.

According to the CDC, one in three American adults don’t get enough sleep. Now there’s a social problem that might as well be slapped with an evil sorcerer hat right now. The solution: the one and only Period Superhero. The progesterone coursing through a woman’s veins is a soporific, meaning it increases a woman’s need for sleep. In short, progesterone helps women fight sleeplessness worldwide.

As is the case with most superhuman gifts, problems arise when we try to resist the pull of our superpowers. If you don’t let yourself catch up on those zzz’s your body demands, things can get pretty ugly. Sleep deprivation exacerbates conditions like Restless Leg Syndrome — which is already twice as prevalent in women as men — and generally increases moodiness, laziness, and lack of energy. Think about it. What if PMS is just a symptom of ignoring the needs of our bodies?

Every superhero goes through a physical transformation of sorts when they activate their superpowers. Clark Kent dashes into the nearest phone booth and emerges in a muscle-hugging bodysuit. The Hulk tears through his business-casualwear faster than a roided-out bodybuilder. So how does a Period Superhero transform?

Ladies, you know the answer to that.

A woman’s breast size increases up to a whole cup size during PMS and menstruation. It’s kind of like hulking out, but in the best way possible. Perhaps over the years you’ve noticed an uptick in the world’s collective joy level? There’s one week a month when the small-breasted women of the world rejoice over their superhuman ability to actually fill-out their favorite curvy girl LBDs. It’s amazing what a little black dress will do. Thanks period power.

When it’s time to hang up the cape….

Even superheroes have to retire. Eventually, it’s time to hang up the cape. You’ve done your part. And, whether you like it or not, menopause will eventually force you to step aside for a new generation of heroes. However, they will need a mentor to help guide them — a Batman to their Robin. You can be their inspiration.

Of course, you know that menopause comes with its own superpowers. Your body is like the Human Torch, you wake frequently, your moods switch faster than the Flash, and it doesn’t stop there. However, we all know that with great power comes great responsibility, and maybe you’re not ready to take on all of it at once. That’s understandable; there are some tips and tricks to help suppress your newfound powers. But, ultimately, it’s a burden that you’ll have to accept, just as you accepted your previous abilities. Luckily, there are mentors out there for you too.

Brooke Faulkner is a mother of two and animal lover from Portland, Oregon.