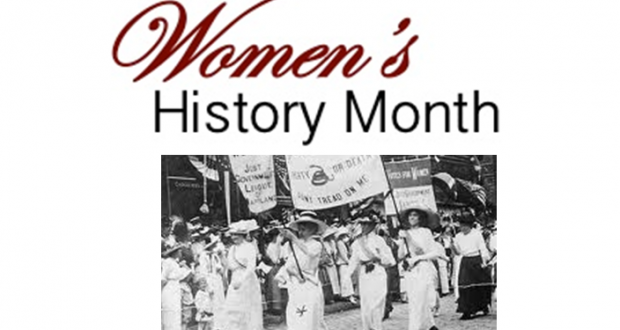 “Weaving the Stories of Women’s Lives”
is the theme for National Women’s Month, March 2015

Weaving ‘Her’ story – women’s stories – individually and collectively – into the essential fabric of our nation’s ‘history’.

There are many remarkable American women who had strictures laid upon them, but were still able to have significant accomplishments to our society.

In 1975, the UN officially recognized International Women’s Day.
Women’s History Week is a progression of that, and Women’s History Month is a further extension.

Throughout the month of March, various community events, internet blog series, television presentations and entertainment specials will be staged to look back on women’s achievements, to celebrate the progress made by women around the world, and to remember that there is still work to be done.

Let’s take a look at a few women who have made contributions in healthcare and science:

Dr. Elizabeth Blackwell was the first woman to receive an M.D. degree from an American medical school (1849). Elizabeth Blackwell earned a medical degree from Geneva College in New York, becoming the first female to be officially recognized as a physician in U.S. history. Dr. Blackwell, born in Bristol, England, moved to the US and attended the medical faculty of Geneva College, now known as Hobart College.

In 1849, she graduated with the highest grades in her class and was granted an M.D.

In 1857, after several years of private practice, she founded the New York Infirmary for Women and Children with her sister, Emily Blackwell, also a doctor. In 1868, the institution was expanded to include a women’s college for the training of nurses and doctors, the first of its kind in America.

Rosalind Franklin (Geneticist): Her strides in X-ray photography led to the best images of DNA strands of her era. James Watson, Francis Crick and Maurice Wilkins received the Nobel Prize for discovering the shape of our genetic material— the double-helix model of DNA. It wasn’t until decades later that Rosalind Franklin was recognized for her contribution. It was Franklin’s research on the structure of deoxyribonucleic acid that helped form the basis for the discovery.

Early in her career, Franklin developed a method of diffracting x-rays that allowed her to capture living organisms. This ability helped her to take ever-more detailed photos of DNA fibers and make major strides in understanding their structure. In fact, her X-ray photographs of DNA — which Wilkins showed to Frick and Watson, were the inspiration for Watson’s imagining of the double-helix.

Dr. Virginia Apgar, M.D., (1909 – 1974) is best known for developing a standardized system to evaluate the health of babies when they are born. The system, known as the Apgar Score was developed in 1952 before the era of fetal monitors and involved looking at the infant’s breathing, skin color, muscle tone, reflexes and pulse.

Alice Hamilton, Industrial Toxicology Pioneer, was the first woman appointed to the faculty of Harvard University in 1919. Alice Hamilton was a pioneer in toxicology during a time in which few people understood the connection between environmental pollutants and human health. Her work was some of the first that identified illness and injury as occupational hazards, thus bringing “industrial medicine” (a common concept in Europe), to the United States.

Henrietta Lacks, changed our health in a much less outright way than many of the pioneering women mentioned above. Henrietta Lacks developed cervical cancer around age 30, and a scientist at Johns Hopkins Hospital in Baltimore used cells from her tumor to create the first immortal line of human cells to be used for future medical research, called the HeLa cells.  Henrietta Lacks passed away to cancer in 1951, but HeLa cells went on to play an instrumental role in several health discoveries and procedures, including developing the vaccine for polio, cloning and in-vitro fertilization.

Ann Preston, was the first female Medical School Dean in the United States. Before becoming the dean of The Woman’s Medical College she delivered lectures to all-female classes with the simple intent of educating them about their own bodies, according to a profile from the National Institutes of Health.

Eleanor Roosevelt transformed the role of the ‘President’s wife’ from one of a society hostess to a policymaker and public figure. It was the former First Lady’s work later in life, after former Pres. Harry S. Truman appointed her to be the Head of the U.N. Human Rights Commission in 1948 — that made her views on public health clear. As one of the primary authors of the Universal Declaration of Human
Rights, Roosevelt made certain access to healthcare was considered a fundamental right bestowed to all.

It would take far too long to list all the most notable, influential and interesting women from our nation’s grand history who have impacted the fabric of our lives.

We are very pleased that we have the ability to carry on the “weaving” and bring together even more fascinating stories of women’s accomplishments in all fields of endeavor.

We wish you the best in your creation of “Her” Story!