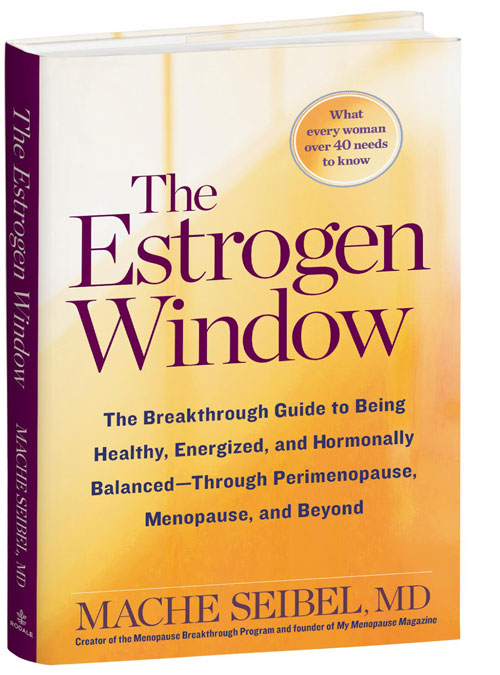 Do You Know Your Estrogen Window?

I’d like to share a story with you about a book you need to know about called The Estrogen Window. Once you read it, you’ll understand why I wrote it and how knowing your estrogen window will help you live calmer, with more energy and hormonally balanced. You can preorder it now at www.EstrogenWindowBook.com and receive a lot of free bonuses for your early order before April 12.

My career began at Harvard Medical School where I had the good fortune of performing one of the first successful In Vitro Fertilization procedures in the United States. It was an exciting time and after years of huge success, found that many of my earlier patients were entering menopause and wanted me to continue taking care of them.

About that same time, the Women’s Health Initiative (WHI) study reported that taking estrogen increased the risk in breast cancer, heart disease and dementia and some other worrisome findings. Women felt betrayed by a medical system that had told them estrogen was good for them and not surprisingly, hundreds of my patients stopped taking estrogen. Without estrogen, they felt miserable. My initial look at the original data caused me to question the negative findings, but it would take over a decade for new studies to really prove how wrong the first WHI study was.

About 7 months after that WHI report was published, a new breast cancer gene called BRCA was reported that increased the risk of both breast cancer and ovarian cancer. My wife, Sharon, had lost many of the women in her family at an early age due to ovarian cancer so she had the test done. Unfortunately it was positive and she was relatively young. Over a decade before Angelina Jolie boldly shared her BRCA status and had her fallopian tubes and ovaries removed, Sharon had her fallopian tubes and ovaries removed. That set her into early menopause and the need to decide if estrogen was a good choice for her.

That’s when it got personal. Now it was not only my growing group of menopausal patients but also my wife who needed to know about estrogen. So I began to go about it the way I do all my research, fully intent on getting to the bottom of the question and getting an accurate answer. At first it didn’t make sense; there were always a few pieces still left over that couldn’t be explained. In the meantime, I had started a new online magazine called My Menopause Magazine (in the Apple Newsstand and on Google Play). In my capacity as editor, I went to all the major meetings and interviewed virtually all the researchers who did the studies on menopause and asked them question after question until I could make all the pieces fit. After all, not only did I need to know for my patients; I had Sharon to advise.

Finally, I had a breakthrough. It clarified how estrogen could prevent heart disease and cause heart disease; how it could be used to treat breast cancer and increase the risk of breast cancer; how it could lower the risk of dementia and increase the risk of dementia and on and on. The reason was what I call The Estrogen Window. Estrogen isn’t good or bad. It’s both and neither. It all depends on when it is taken.

If a woman begins estrogen early in her estrogen window, it will lower her risk of breast cancer, dementia and heart disease and maximize the treatment of symptoms. If begun after the window closes, symptom relief can be reduced and it can increase the risk of those same diseases it earlier helped to prevent. It also matters if a woman takes estrogen only or estrogen plus a progestogen, which is required for women who have not had a hysterectomy.

So I wrote a very easy to read explanation of one of the most vexing problems in women’s health. And when you read it, you will be empowered with what you need to know to talk with your healthcare provider to determine if estrogen is right for your, which one, when to start it and when to consider stopping it. You’ll find out what a terrible impact not taking estrogen had on women’s health, relationships and effectiveness in the workplace. You’ll understand the difference between the various routes of taking estrogen and some critically important facts about the risks and benefits of bioidentical and compounded hormones. And most importantly, you’ll be empowered to make the best choices for your health and be a messenger to help your friends and family. And that will be transformative. Preorder yours now at www.EstrogenWindowBook.com.